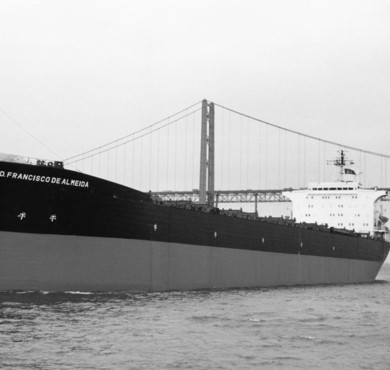 
PORTLINE Transportes Maritimos Internacionais, S.A. ("Portline S.A.") was established in 1984 by the Portuguese Government to meet the needs of the country by guaranteeing autonomy in the supply and transport of the major dry bulk commodities, thus supporting the country's economical development.
Portline inherited the know-how and work force of two former Portuguese state-owned companies, CNN - Companhia Nacional de Navegação  SA and CTM - Companhia Portuguesa de Transportes Marítimos SA, extinct in the late '80s, as well as a long tradition in marine trade, whose origin dates back to the fifteenth century.

Focused in the International market, Portline S.A. has developed a remarkable expertise in the transport of dry bulk and containers, together with all the related shipping activities, namely Technical know-how, Sale and Purchase and Crewing.

In 2004, as a part of business activity reorganization, Portline Holdings Maritime Corporation ("Portline Holdings") was established and became the sole shareholder of all ship owning companies.  Portline S.A became a service provider as the technical and commercial manager of the Company’s fleet.

It was however from the year 2000 onwards that Portline S.A. successfully accomplished this fleet renewal, increasing its tonnage of dry bulk vessels, particularly in the Supramax segment.